Showing posts from 2017
Show all

Our Haunted Hollywood Halloween was an award-winning success in the Santa Clara Citywide Halloween Decoration contest! You can watch our full Front Show , or excerpts from the show plus a walkthrough of the entire Haunted Hollywood Horror Monster Museum featuring 13 classic movie monsters ! For Halloween 2017, the 21st-century Webmistress of the Dark hosted the grand opening of the Hollywood Horror Monster Museum, a collection of 13 classic movie characters & props in a Golden Age movie theatre that was “rumored to be ‘haunted’ but I’ll believe that when I see it!” Our guests were welcome to walk & pose on the red carpet in front of the gilded proscenium vintage movie screen, complete with projected red curtains, roaming spotlights and the custom Hollywood Horror Monster Museum logo as the show began. Four platforms including The Mummy with his sarcophagus, Frankenstein's Monster & his Bride, Werewolf, and Nosferatu were on display bordered with red velvet ropes. S
Post a Comment
Read more 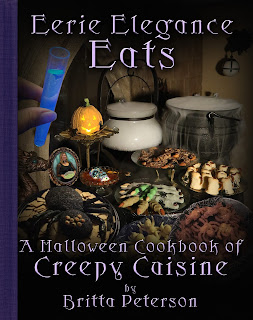 Frightful Skull Fountains in stock for 2017! 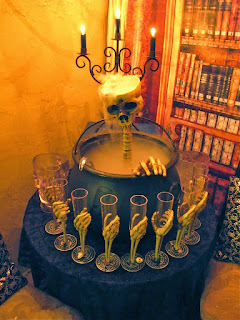 I am pleased to announce that my Frightful Skull Fountain do-it-yourself kit is back in stock for 2017! This is an improved version since the instructions included inside my book Enhanced Eerie Elegance , with a customized skull funnel that works with a custom-cut cauldron handle support. Just add your own cauldron, and you're all set for a fantastic Halloween punch bowl! Your Frightful Skull Fountain Kit includes: Plastic Vertebrae Tube Skull Funnel, with custom black handle grip attached under the skull's chin Plastic Skeleton Hand U-shaped Wire Support for Skeleton Hand 3 feet Clear Vinyl Tubing, with black fountain pump nozzle already attached Fountain Pump with extra nozzle (120 GPH, pumps up to 3ft high) Custom-Cut Cauldron Handle Support Step-By-Step Photo Instructions with Recipes and Dry Ice Tips You need to supply your own plastic cauldron, and 12" to 16" diameter is recommended to look best with the size of the skull. The included instructions sh
Post a Comment
Read more
More posts